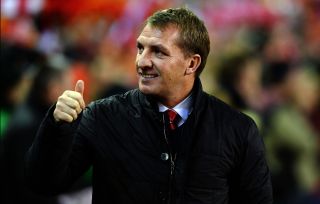 Liverpool booked their spot in the fourth round - where they will play either Burton Albion or AFC Bournemouth - thanks to Iago Aspas' 54th-minute strike and a late James Tarkowski own goal on Sunday.

They were far from convincing though, and barely registered a shot on target in a below-par first half against the League One strugglers.

Rodgers chose to rest Luis Suarez and Philippe Coutinho from the start and said Oldham played well, but added that he was also pleased with his side's response after the break.

"I thought it would be a difficult game and I think you've got to give Oldham a lot of credit," Rodgers said.

"They came here and made it very difficult. For us we were nowhere near the speed of our game in the first half. The tempo was too slow and we didn't create enough.

"In the second half we were a little bit better but it was always in the balance."

Rodgers was forced to bring both Suarez and Coutinho off the bench in the second half as Liverpool went in search of victory.

And although the Northern Irishman had hoped to avoid using the attacking pair, he said it was necessary to avoid a replay.

"We hoped in a game like this we hoped to rest a number of players and give them that recovery period," he said.

"A few of the guys have played hard games over the Christmas period, so the idea was for them to recover.

"But we also wanted to win the game. We didn't want a replay, so the second half was better. We were livelier and ended up with a good victory."

Liverpool have won the FA Cup seven times in their history, most recently in 2006.