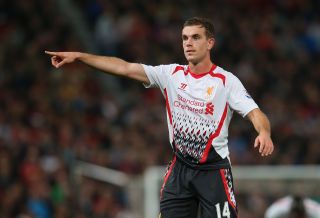 The 23-year-old midfielder has not represented the senior side since Euro 2012, but his performances for Liverpool and the England Under-21 side have earned him a chance to impress with the senior team for the upcoming friendlies against Chile and Germany.

Henderson has started in all 10 of Liverpool's Premier League matches this season and his manager believes it is just reward for his form.

Henderson's natural position is in the centre of midfield, but he has been used in various others under Rodgers. And the Northern Irishman believes that versatility could see him make England's FIFA 2014 World Cup squad.

"It's great for the boy and it's merited from the start he's had to the season, he has been outstanding," he said ahead of Liverpool's clash with Fulham on Saturday.

"It's a big credit to him that I've been able to play him in a couple of positions.

"If you're going to a World Cup, you're going to need players that can play in a number of positions well. He can do that, he's shown already this season how versatile he is.

"He'll make a lot of improvements over the next couple of years and can become a really top player."