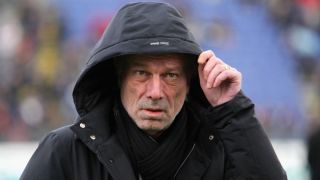 Walter Sabatini has left his role as Roma's sporting director after five years with the club.

The former Roma midfielder came to an agreement of mutual termination of his contract with the club, and Frederic Massara will now take up the position.

Sabatini played a key role in recruiting a number of stars to the Giallorossi squad and turned a huge profit on Erik Lamela and Marquinhos, among others.

After Roma announced the change, which will take effect on Friday, president James Pallotta thanked Sabatini for his service.

"I would like to thank Walter for what he did for Roma and for his dedication to our club," he was quoted by the club's official website.

"I would also like to thank him for everything that I learned from him. Please stop smoking!"