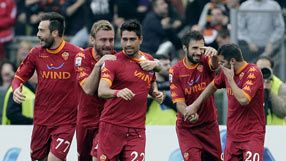 Creditor bank UniCredit has been working with owner Italpetroli for months in an effort to put the club up for sale and wipe out large debts. It kicked off the sale in September, sending the shares to their highest in more than a year.

"With regards to press reports concerning the sale procedure of the controlling stake in AS Roma, Compagnia Italcementi informs that it has received... non-binding offers, currently under scrutiny by the company and its adviser," AS Roma said in a statement late on Friday.

Russian media had reported in September that LUKOIL Vice President Leonid Fedun, was interested in purchasing a controlling stake, but LUKOIL had no comment.

Roma has been the subject of continual takeover talk, with Italpetroli struggling to deal with arrears.

Creditors have been trying to force a sale for three years, but bids from billionaire financier George Soros and a Swiss consortium never came to fruition.

Italian pharmaceutical magnate Francesco Angelini has never put forward concrete plans for a bid after saying he wanted to buy a majority stake in the club.