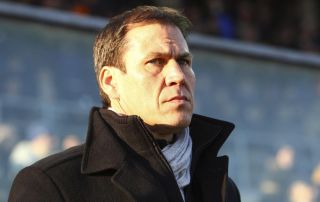 Garcia has enjoyed a superb debut campaign at Stadio Olimpico, with the Eternal City club still in with a slight chance of claiming the championship.

Juventus appear to be set to retain their title, as they hold an eight-point lead at the summit with four games remaining.

However, the 50-year-old Frenchman - who has seen his side rack up eight straight Serie A victories - is refusing to give up the ghost.

"I said this after Florence (where Roma defeated Fiorentina 1-0 to seal a Champions League spot), the season is not over yet," he said ahead of Friday's encounter with Milan.

"We must win tomorrow and then see what Juve do."

Regardless of whether Roma can usurp Juve, the club will embark on a Champions League campaign next season.

And Garcia is planning on strengthening his squad in order to cope with the demands of a hectic schedule.

He added: "We must think carefully about signings because we'll be playing every three days and that obviously means more injuries.

"No club gets 100 per cent of their summer signings spot on because footballers can take time to settle in. It'll be hard next year because we'll be playing every three days until December at least and hopefully in spring too.

"But I'm sure that Roma and I will have another successful year together next season. I'm ambitious and I think Roma is too. We've had a record-breaking season, now we want to end it well.

"We're all proud to work for Roma and we'll do everything we can to take it even higher among the top European clubs."