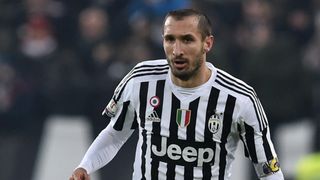 Juventus defender Giorgio Chiellini thinks the 1-0 Serie A win over Roma has ended the capital club's chances of winning the title this season.

The champions' victory, which was sealed by Paulo Dybala's late strike, sealed an 11th consecutive league triumph as Massimiliano Allegri's team continue to push for a fifth straight title.

Chiellini feels Sunday's crucial result has brought an end to Roma's Scudetto hopes for 2015-16 in the process.

The Italy international, though, was not ready to rule Fiorentina and Inter out of the battle to top the table.

"If Roma had got a result against us they still had the chance to get back in, but now with a 10-point gap to us and 12 to Napoli, it would take a sporting miracle," he told Sky Italy.

"The other teams are very close together, so just about anything could happen. It is clear now that Napoli are a step ahead, they are in front of everyone who were touted as favourites.

"But to say Inter and Fiorentina are out of it seems wrong. Inter are a great team made up of great champions and Fiorentina can beat anyone with the enthusiasm they showed early in the season, but have lost slightly.

"If they can maintain that spirit for a long time they can cause problems for anyone."

Chiellini was impressed to see Juve overcome another difficult obstacle as their stunning run of league form continued.

"After 10 wins, it is increasingly difficult to keep winning," the 31-year-old added.

"The difficulty and calibre of the opponent, even if they are in a difficult period, gave us a hotter atmosphere in the stadium.

"We have found a good identity now, we can suffer and we can play. The team is working well."