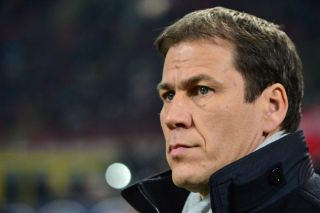 The leaders and reigning champions sent out a statement with a 3-0 victory at the Juventus Stadium on Sunday, with Roma finishing with nine men in an ill-disciplined end to the match.

Arturo Vidal opened the scoring from a tight angle in the first half before Leonardo Bonucci added a second after sliding in to meet Andrea Pirlo's whipped free-kick shortly after half-time.

Roma's night went from bad to worse with two dismissals in any as many minutes with Daniele De Rossi and Leandro Castan both seeing red, the former for a high challenge on Giorgio Chiellini, the latter for a handball on the goalline.

Former Roma striker Mirko Vucinic wrapped up the match by converting the resulting spot-kick to open up an eight-point advantage at the top of the table over his old club.

However, Garcia has refused to give up the fight, but admitted the club's primary focus is a return to European football.

"There are another 60 points available," he told Sky Sport Italia.

"But the title is not our objective. Our objective is to get back into Europe, so we are now second and that is a good place to be in. After that, we'll see what happens."

A combination of poor defending and Juve's ruthlessness in front of goal left Garcia to bemoan a lacklustre end to Roma's undefeated start to the Serie A campaign.

He added: "I don't know if this was the worst way to lose our unbeaten record, but it is bad to end with nine men. At 2-0 we still had the chance to get back into the game, but we were unlucky to concede the two goals in bad moments of the match.

"Unfortunately, they scored at the first chance and we didn't take ours. It hurt to concede straight after the restart. Juve did well on set-plays and we have to work on some issues.

"In my view it is a problem of efficiency. Neither side had that many chances, so you've got to take them when they arrive. We know this is football and Juve have a ruthless team, so we must learn to be ruthless too.

"It is always difficult to play away to Juve and keep a clean sheet. They have very strong strikers, but I have no doubt that in the first half we played the right game. In order to win you also need luck in important moments and the luck was more with Juventus than with us."