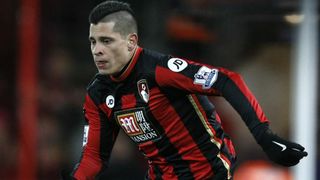 Juan Iturbe jumped at the chance to join AFC Bournemouth in order to escape the "pressures" of life with Roma.

The 22-year-old joined moved to the Stadio Olimpico for an estimated €22million in 2014 but failed to cement his place in Rudi Garcia's first team and now has the chance to impress in the Premier League after signing a loan deal until the end of the season.

Iturbe hopes to rebuild his confidence in England and is confident he has made the right switch in order to aid his development.

"I appreciate the opportunity that AFC Bournemouth have offered," he said on Friday.

"The reasons I wanted to change was I wanted to feel better in myself. It's a new challenge and there were pressures in Rome and AFC Bournemouth have offered me a very good opportunity. It was an easy decision to make.

"I got some good references about the club, the training is intense but I'm enjoying it. I look forward to integrating with the rest of the team."

"It's early days, all three are good characters," he said.

"Juan's been popular although he doesn't speak the language yet, he's always got a smile on his face.

"It's nice to have done some business early but it's all relative, we lost some players early in the season so we're trying to replace those numbers and make sure we have strength in depth to attack the second half of the season."