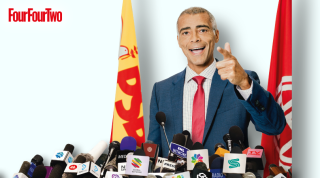 The Selecao eventually won after a goalless 120 minutes at Pasadena’s Rose Bowl, with Roberto Baggio skying the crucial spot-kick.

Barcelona striker Romario, who bagged five goals en route to the tournament’s showpiece, had earlier converted his penalty – nonchalantly in off a post – after Marcio Santos had seen Brazil’s opening kick repelled by Gianluca Pagliuca.

But the diminutive frontman, who scored 165 goals in 167 games for PSV from 1988-93, has revealed that it had been his first ever spot-kick for the national team.

Speaking exclusively in the August 2017 issue of FourFourTwo magazine, the legendary Brazilian – who has since become a senator in his home state of Rio de Janeiro – says: “Despite what many people seem to think, I was very calm during that final. Yes, I was nervous about taking a penalty during the shootout, but only because I’d never taken one before for the national team.

“I never practised penalties. It was a tense experience to take part in a penalty shootout of such importance but, of course, it all worked out well for us in the end.

“It was a big relief. After 24 years, we had finally won another title in a moment like now, a moment of much suffering and much corruption. In spite of all the problems in our country, the supporters were able to smile. My most vivid memory is getting the trophy from Dunga and lifting it in the air. My proudest moment was becoming a world champion.”

Read the full interview with Romario in the August 2017 issue of FourFourTwo magazine, which features an exclusive interview with Atletico Madrid frontman Antoine Griezmann about his on-off move to Manchester United. Also this month, we go One-on-One with World Cup winner-turned-jiu-jitsu champion Bixente Lizarazu, try to impress LA Galaxy scouts at a trial, recall the Rumbelows Sprint Challenge and Dallas Tornado’s mental world tour, chat to Ashley Cole about coaching at Chelsea, and celebrate Serie A football during the 1990s. Order it now, and then subscribe!