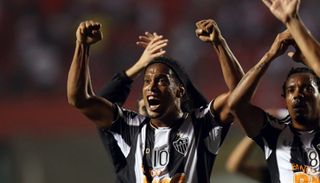 The former Paris Saint-Germain, Barcelona and AC Milan forward sounded an early warning when he beat two defenders and fired over the crossbar.

Ronaldinho then created a flurry of first-half chances for his team-mates but only one was converted by former Everton and Manchester City striker Jo in the 15th minute.

Seven players were booked in the first half and Cruzeiro were reduced to 10 men after the break when Bruno Rodrigo hauled back Ronaldinho and was dismissed.

Ronaldinho still was not finished and provided the cross which ended with Diego Tardelli scoring the Roosters' second. Marcos Rocha completed the scoring in the 78th minute from a rebound after a Jo headed hit the crossbar.

Referee Luis Flavio de Oliveira left the field clutching his thigh one minute later and was replaced by the fourth official.

The Mineiro is one of the numerous regional tournaments, each with different and often highly complex formats, which kick off the marathon Brazilian season.

Dinei scored four goals to help Vitoria to a 7-3 win over Joel Santana's Bahia in the first leg of the Baiano championship at Salvador's Fonte Arena, one of Brazil's recently rebuilt World Cup stadiums.

Fans were banned from bringing in caixirolas, small percussion instruments which supporters shake incessantly at games, into the ground after they were turned into missiles and hurled onto the pitch during a previous match.

Corinthians beat Santos 2-1 in the first leg of the Paulista championship final.