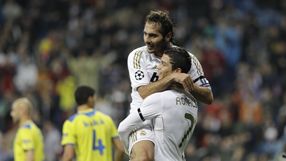 Jose Mourinho's men maintained their 100 percent home record in the tournament this year with a 5-2 second leg win at the Bernabeu against the valiant but limited tournament debutants.

Leading scorer Cristiano Ronaldo bagged a brace, including a swerving and dipping free-kick, to take his season tally to 49

Kaka curled in a sumptuous long-range effort, the busy Jose Callejon came off the bench to notch Madrid's fourth and Angel di Maria continued to work his way back to full fitness after injury as he came on at the end to lob a fifth.

The La Liga leaders have scored 100 goals in their 30 league matches and in Europe have racked up 32 in 10 so far.

"The team are in good shape and we are well prepared for a difficult April," coach Jose Mourinho said.

Having won 3-0 in Cyprus last week, and with a tough league clash at home to third-placed Valencia on Sunday, Mourinho was able to rotate some of his players, though as ever, Ronaldo started and finished.

Conceding two goals at home to the unheralded Cypriots, a breakaway from Gustavo Manduca that made it 2-1 after 67 minutes and a penalty given away by Hamit Altintop near the end, was of no particular concern to Mourinho.

"I am not going to criticise anyone for the odd loss of concentration, because over the last two years this group of players have given their all," he said.

Mourinho, who is bidding to guide the world's richest club to a 10th European Cup triumph, and a fourth for himself with a fourth different team, predicted a classic encounter with Bayern.

"They are a great rival, very powerful at an institutional level and in football terms," he said,

"They are basically the same team I played two years ago with Inter Milan [when he beat them in the Champions League final].

APOEL bow out with the heads held high after grabbing two surprise goals which were loudly hailed by their colourful and raucous group of travelling fans.

"The final result was fair. They were better than us but we leave satisfied," APOEL coach Ivan Jovanovic said.

"The important thing is the result was not terrible and we managed to score as well. There were lots of goals and the fans will have enjoyed it."

"It's been a great year for us. We were the only team left who started out on the 12th of July. It was our 16th match and we don't have a big squad. We worked hard to get here and we deserved it. The Bernabeu was a fitting place to end our run."

Mourinho gave them a glowing tribute. "Theirs is the biggest achievement in the Champions League this year. If Barcelona, Bayern or us go on to win, it won't be as big and achievement as theirs has been."