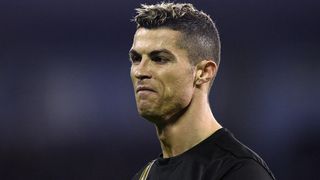 Real Madrid forward Cristiano Ronaldo has been ranked the 49th most valuable player in the world by a new study.

The 32-year-old is behind Manchester United's Anthony Martial and Manchester City's Nicolas Otamendi in the table and one place ahead of Monaco's Fabinho.

Neymar is top of the list of the top 100 most valuable footballers, compiled by the CIES Football Observatory, ahead of Lionel Messi in second and Harry Kane in third.

The annual assessment of players in Europe's top five leagues takes into account a variety of factors, including age, position, contract duration, performance and international status.

Neymar's valuation of €213million is more than double that of Ronaldo, who is considered to be worth €80.4m.

Neymar is evidently Ligue 1's most valuable player, with Messi (€202.2m) leading the way for LaLiga players. Paulo Dybala is top of the Serie A contingent at €174.6m, with Robert Lewandowski setting the benchmark for the Bundesliga at €107m.