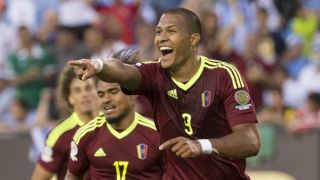 Salomon Rondon is determined to push on with West Brom this season after a promising Copa America Centenario campaign with Venezuela.

Rondon scored 10 goals in 42 appearances for the side last season, before netting twice for the national team at the Copa America in the United States, including the winner against Uruguay and a consolation in a 4-1 quarter-final drubbing against Argentina.

"I am fit and well and ready for the new season," Rondon told the club's official website.

"The Copa America was very good for me and my national team.

"We played very well but unfortunately we were eliminated by Argentina in the quarter-finals."

Rondon said he was feeling confident after a solid end to last season and his performances at the Copa America.

"I scored goals for Albion and also for Venezuela at the end of last season so I am coming into the new season with lots of confidence," he said.

"It's very important for me to score goals and I hope to score more this year than I did last year.

"This pre-season is very important for us and we have to make sure we are physically prepared for the new season."