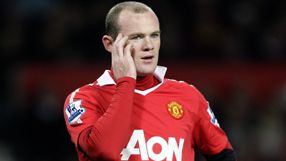 Goals by Patrice Evra and Javier Hernandez put United level on 28 points with leaders Chelsea who lost consecutive league games for the first time in more than four years, going down 1-0 at Birmingham City who scored with their only effort on target.

Arsenal wasted the chance to go top in the early game when they blew a two-goal lead against Tottenham Hotspur to lose 3-2 at Emirates Stadium. The Gunners, who had not lost at home in the league to their arch-rivals since 1993, are third on 26 points.

Rooney got a mixed reception from the Old Trafford fans when he came on in the second half to make his first appearance since signing a lucrative new contract in October after stating he wanted to leave the club because it did not match his ambition.

The England striker, who has since been recovering from an ankle injury in Dubai, looked lively but was unable to get on the scoresheet despite Wigan losing Antolin Alcaraz and Hugo Rodallega to red cards in quick succession after an hour.

Evra headed United in front from Park Ji-sung's cross on the stroke of half-time and Hernandez, who also came off the bench, sealed the points with another header after 77 minutes.

In the dying moments, Rooney scuffed an effort straight at Wigan goalkeeper Ali Al Habsi while Evra inexplicably fired wide from the angle of the six-yard box.

Rooney also went close with a header as he searched in vain for his first United goal from open play this season.

"We are yet to hit our best form and normally we do that in the second half of the season so that can't come soon enough," Sir Alex Ferguson, whose side are still unbeaten in the league this season, told Sky Sports.

"Wayne got a great reception, that was very satisfying. It has taken a lot of pressure off him."

Lee Bowyer's goal lifted Birmingham out of the bottom three and completed a terrible week for champions Chelsea, who lost 3-0 at home to Sunderland last week and are struggling without injured skipper John Terry.

Bowyer scored after 17 minutes and despite intense pressure the visitors were unable to reply as Birmingham held on for their first home win against Chelsea since 1980.

"It was a good reaction from us, there was a good spirit a good attitude," surprisingly upbeat Chelsea manager Carlo Ancelotti said. "We deserved to win today, just like we deserved to lose last week against Sunderland. That's football."