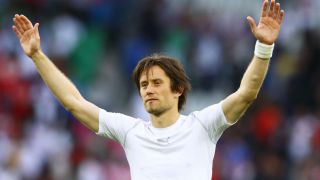 Former Arsenal star Tomas Rosicky has announced his retirement after succumbing to the rigours of professional football at the age of 37.

The Czech midfielder won silverware with the Gunners, Borussia Dortmund and Sparta Prague, where he started and ended a career that spanned 18 years.

He also won 105 caps for his country, leaving him third on the all-time list behind only Petr Cech and Karel Poborsky.

"After careful consideration I have realised I am no longer able to fully prepare my body for what professional football requires," Rosicky said at a press conference on Wednesday.

"I would like to thank Sparta for raising me, for being the first step in my career in big clubs, and for allowing me to say goodbye at the place I love the most."

Rosicky, who returned to Sparta in August last year, will be best remembered for the decade he spent with Arsenal, where he won two FA Cups.

He was a Bundesliga champion with Dortmund in 2001-02, having won two Czech First League titles at Sparta.