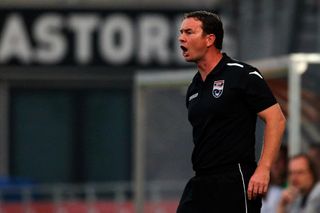 County returned to the Scottish top flight last term and recorded a seventh-placed finish under Adams, who also used to play for the club.

The club have lost their first four games of the current campaign, though, and Saturday's 2-1 defeat at Dundee United proved the final straw.

Adams' father, George, who was director of football at Ross County, will also depart the club.

A club statement read: "Ross County FC and their manager and director of football, Derek and George Adams, have come to an agreement, whereby they will part ways, effective from today.

"Chairman, Roy MacGregor, wishes to recognise the contribution both have made to the journey that Ross County FC have made over their years with the club and wish both well in their future careers.

"Further details of the club's continuing restructuring will be made available as plans are ratified over the following days."

Ross County visit Hamilton Academicals in their next Premiership match on Saturday.