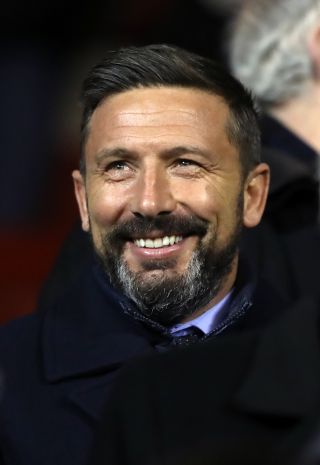 Derek McInnes says the capture of Ross McCrorie has helped lift the doom and gloom over Aberdeen.

The Dons were forced to postpone three games and are facing SFA and SPFL charges after eight players broke coronavirus guidelines during a team night out.

But they return from lockdown to face St Johnstone on Thursday night and will have new signing McCrorie on board after McInnes beat Hibernian to land the Scotland Under-21 captain from Rangers.

McInnes – who is also set to welcome back four members of the infamous ‘Aberdeen eight’, Craig Bryson, Dylan McGeouch, Matty Kennedy and Jonny Hayes, following their period of self-isolation – said: “I think it’s been a brilliant week for us. I think we need to applaud the club for helping me to bring Ross in.

“He’s been on every list of young Scottish players we’d like to work with for the last couple of years.

“When we knew we had no room for error and that he might go elsewhere, I’m glad we got support from the board.

“So it’s been a real shot in the arm for me. The general atmosphere has been lifted and I’m now looking forward to what is a very important game.

“But hopefully that can be the narrative now. I think there’s been enough comment, enough criticism, enough apologies made and there comes a time when you have to draw a line under it.

“It was our turn. We took it, we dealt with it and we now move on.”

There was more bad news on top of the club’s Covid breach when on-loan Leeds striker Ryan Edmondson was ruled out for up to three months with an ankle knock.

The teenager has returned to Elland Road for treatment while McInnes starts a new search for a striker.

But the Reds boss has not given up hope of seeing Edmondson back in a Dons shirt.

“Clearly we’re keen to bring another striker in, either as a loan or on a short-term deal to January,” he said. “Hopefully Ryan will still have a part to play. He says he’s a quick heeler and Leeds are positive he will be back way before the loan expires

“There are plenty games in November and December to be played – and hopefully a cup final too – and that’s what we’re trying to channel through to him during his rehab.”

Aberdeen’s Perth trip was originally scheduled for August 8 but was shelved when two members tested positive for the virus and another six forced to quarantine.

The postponement has left the Dons playing catch-up, but McInnes said: “I’m relaxed about the fact we’re two and three games behind the others. We can make those games up and I don’t look at the table until after that first round of games is completed anyway.

“But clearly getting your first win of the season is pivotal and we have an opportunity to do that tomorrow.

“We’ve played one competitive game in six months, so it’s clear we’re not going to be at our best, but we’ll still be good enough to try to win the game.

“We’re bursting to play – I just wish the game was today.”