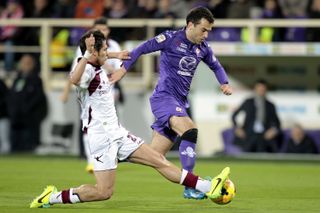 Rossi was injured following a challenge from Leandro Rinaudo and underwent tests on Monday.

The 26-year-old, who has suffered cruciate knee ligament damage twice in his career, was given better news than many had feared, but will travel to America to undergo further analysis before any timescale can be put on his return.

A statement from the club read: "This morning the player underwent orthopedic examination and diagnostic tests that confirmed the sprain to previous knee reconstruction surgery (to an) anterior cruciate ligament injury right with second degree medial collateral ligament of the same limb.

"In order to evaluate the extent of damage and prognosis, he will be assessed in the coming days by a specialist, Richard Steadman, the surgeon who performed the second surgery for reconstruction of the cruciate."

Rossi is the top scorer in Serie A this season with 14 goals and a likely member of Italy's World Cup squad provided he can recover in time for the tournament in Brazil.