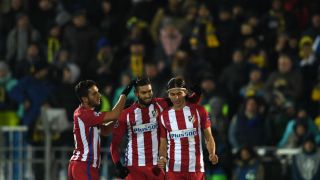 Yannick Carrasco's well-taken second-half strike was enough for Atletico Madrid to end Rostov's 26-match unbeaten run at home with a 1-0 triumph and put them on the brink of the knockout stages.

The Russian side had not suffered a defeat in any competition at home since May 2 2015 but a dominant Atletico were clearly a class above.

Their persistence paid off when Carrasco, who scored a hat-trick in Sunday's 7-1 battering of Granada, eventually found the goal to take Atleti's Group D tally to nine points from three matches.

Atletico were all over their hosts in the first half and should have broken the deadlock on numerous occasions, with Angel Correa particularly culpable after missing two clear-cut chances.

The vistors' control remained a constant after the break and they did eventually take one of their chances, as Carrasco produced a tidy finish in a tricky situation.

Rostov looked a little more attack-minded once behind, but Diego Simeone's men had no trouble seeing things out in trademark fashion and keeping them ahead of Bayern Munich with their third 1-0 win of the round-robin stage.

Victory in the return fixture will now guarantee last season's runners-up progression to the last 16.

Atletico began with the confidence of a side that scored seven on Sunday and should have been ahead in just the second minute when Correa flashed wide of the target after Soslan Dzhanaev failed to hold on to Carrasco's free-kick.

The visitors had little trouble asserting control over Rostov but wasted another good chance went begging as Carrasco cut inside his marker and tested Dzhanaev after a clever flick from Antoine Griezmann.

Rostov crafted an opening of their own shortly after, but Sardar Azmoun scuffed a 20-yard effort straight at Jan Oblak instead of feeding Igor Kireev to his right after a brilliant Dmitry Poloz run.

That proved to be only a momentary lapse for Atletico, who again went close through Correa, who blasted wide from close range after a teasing Filipe Luis cross.

Atletico showed few signs of letting up early in the second half, but Rostov began to sit even deeper, resulting in fewer opportunities for Simeone's men.

They did go close just before the hour-mark, though, as Fernando Torres met Juanfran's right-wing delivery and headed it on to the roof of the goal.

And the breakthrough arrived in the 62nd minute with Juanfran crucial again.

The right-back's inviting cross was accidentally flicked on at the near post by a defender and Carrasco smashed in from a tight angle.

Griezmann almost made certain of the victory as he raced on to Carrasco's scooped pass and saw his header pushed away from the top-left corner by Dzhanaev.

And Rostov were unable to punish that miss as Atletico held on to secure a straightforward win that leaves them with one foot in the knockout stages.