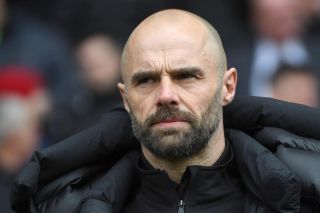 Rotherham manager Paul Warne said his team will not give up despite facing a battle to survive relegation from the Sky Bet Championship after a 3-1 home defeat to Birmingham.

The Blues secured their own status and reached the 50-point mark thanks to goals from Jacques Maghoma, Jota and substitute Kerim Mrabti.

But the Millers are three points adrift of Millwall, who have a game in hand as well as a superior goal difference, and face a trip to West Brom and play at home to Middlesbrough on the final day of the season.

Warne said: “We won’t give up. This group, I have tried to sign characters and leaders.”

Warne had gone into the game knowing his side needed to win and a sharp finish from Matt Crooks midway through the first half saw them on top.

Warne said: “It was a must-win game. We didn’t win it so it’s disappointing. We might get a win and a draw and Millwall don’t pick up anything. At half-time today life was looking half full and now it looks half empty.

“They are two games that we need to get something from. I won’t approach them any differently. I am very hopeful if we can pick something up on our travels at West Brom it could come down to the last game.”

The home side took the lead after 22 minutes when a low ball by Ryan Williams was cleared by Michael Morrison only as far as Crooks.

He shot low into the bottom corner from 12 yards with the Birmingham captain claiming the Rotherham player had controlled the ball with his arm.

Rotherham came close to a second goal with 10 minutes of the half remaining as Joe Newell’s corner was headed goalwards by Semi Ajayi and the rebound was fired over by Will Vaulks from close range.

Birmingham started the second half in determined mood and levelled after 55 minutes as Maghoma fired home from inside the area.

Birmingham’s second came when Che Adams skipped past Richard Wood and crossed low for Jota to pick his spot and guide the ball into the bottom right corner.

Deep into the five minutes of stoppage time, Birmingham wrapped up the win as substitute Mrabti scored his first goal for the club, firing low under Marek Rodak after being fed by Maghoma.

Birmingham manager Garry Monk revealed he had changed to a diamond formation at half-time and that was the key to his side’s victory.

Monk said: “I think in the first half the key was they were well on top of the second balls.

“We changed a little bit tactically at half-time. We had much more bodies around the second balls. That changed the game.

“They were really good goals and we looked a real danger when we got into those situations.”

Monk said the spirit of the team and fans after the club were given a nine-point deduction for breaching profitability and sustainability rules had been important.

“I am really proud of the players in what’s been a really difficult season, it’s been one of the toughest I’ve had as a manager.

“I can’t be prouder of the team and the fans. The unity has been important for us.”