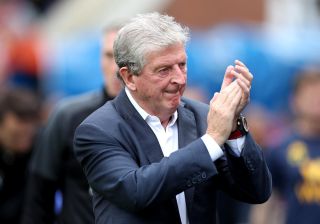 Roy Hodgson has expressed his delight at Crystal Palace’s start to the Premier League season while playing down the significance of their position in the table at this stage of the campaign.

The Eagles, with 14 points from their nine games so far, started the weekend lying sixth, a place and a point behind Arsenal, who they face away on Sunday.

Palace boss Hodgson said: “The fact we are close to them at this moment in time is something which I’m very pleased about, and I’m very happy to have that many points in the bag.

“But I really don’t see where you are in relation to other teams in November has got a great deal of relevance when it comes to discussing what the season is going to be like. It is how close you are in May, that is the thing that matters, and we are fully aware of that.

Palace were one of two teams from outside the ‘big six’ clubs occupying top-six places heading into this round of fixtures, the other being Leicester.

When Hodgson was asked if he thought there was an opening this season for sides not in the traditional group to secure top-six finishes, the 72-year-old said he felt “the quality of the Premier League improves all the time” and that “we know we have to try even harder every year to keep pace with it”.

He then added: “Of course, there’s always going to be a situation I think where the teams who are traditionally top-six will maybe have a slight hiccup, a season where things don’t go quite so well for them, and I would think there are quite a few teams ready to take their place.

“But for us, we have to keep our feet on the ground, enjoy where we are at the moment, and realise that if we want to stay there we have got to win a lot of games.”

Palace won 3-2 at Arsenal in April, four months on from achieving the same scoreline at Manchester City, and earlier this season they triumphed 2-1 at Manchester United.

“We are happy with the results we have got against those teams, with that record, but we are aware that to keep that record we have to produce some of the performances,” said Hodgson, whose side lost 2-0 against City last weekend.

“Some of those victories came after very good performances, an awful lot of effort and tactical discipline and often some quite clinical finishing into the bargain. That is what being a good team that beats a good top-six team is about.”