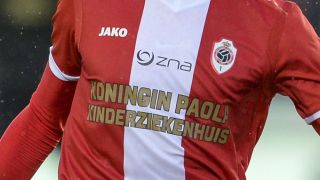 Belgian outfit Royal Antwerp are in mourning following the death of 17-year-old Joel Lobanzo, who passed away from cardiac arrest.

Youth-team player Lobanzo suffered a sudden heart attack after collapsing during a training session with the under-19 side on Tuesday.

Lobanzo was taken to hospital but the Antwerp teenager died on Thursday, the club said.

"We discovered this terrible news that Joel Lobanzo, a 17-year-old youth player from RAFC, died last night," the club said in a statement. "The young football player had become a victim of sudden cardiac arrest during the training of the U19s on Tuesday night.

"The medical supervisor and trainers who were in the vicinity of the player immediately started resuscitation, after which the MUG team transferred the player to the UZA in critical condition.

"The young man remained in critical condition for more than one day, but sadly died during the night from Wednesday to Thursday.

"At the time of this tragic event, some tens of young people were present in the training fields. For all witnesses of this awful incident -- both fellow players, trainers and youth workers -- the club has provided shelter and support since yesterday.

"Over the next few days this will be the case. This is further communicated internally. For respect for Joel and his family, the club wishes to limit communication."