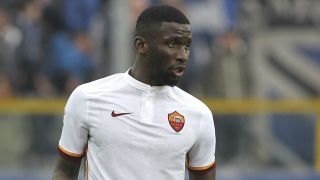 Roma defender Antonio Rudiger has voiced his dismay with the way racism is handled in Italy and has urged the authorities to take stronger action.

The Germany international was at the centre of outcry last December when comments aimed at him by Lazio midfielder Senad Lulic sparked accusations of racism, while he has also been the subject of monkey chants from the stands on more than one occasion.

Rudiger is not the only Serie A star to have been abused by fans – Sulley Muntari walked off the pitch in similar circumstances during Pescara's meeting with Cagliari – and he feels more needs to be done.

"I was subjected to monkey chants in a number of games and nothing happened," Rudiger said at a news conference in Russia, where he will represent Germany during the Confederations Cup.

"I cannot understand the lack of action, you have to do something about it. The referee should let the stadium announcer know and ask him to give a warning. If they still continue after that, I would welcome it if a game was called off.

"This is 2017 and this kind of behaviour can no longer be happening. You see all the banners out there saying 'no to racism', yet nothing happens in Italy.

"It is easy to say we should stay calm when you do not have the same skin colour. They will never know how it feels.

"Strong action needs to be taken against racism."