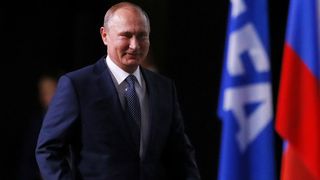 There was a huge upset in the last 16 as Russia stunned 2010 champions Spain on penalties thanks to Igor Akinfeev's heroics in the shoot-out.

Not much was expected of Russia prior to the tournament after they exited Euro 2016 and the 2014 World Cup without winning a game.

However, Russia have defied the odds and are riding a wave of momentum heading into Saturday's clash at Fisht Stadium in Sochi.

"Criticism is good actually. I believe we should have our eyes open and ears ready and when you're praised all the time, it's bad too," Cherchesov told reporters on Friday. "We Russians like extremes. Let's not go to these extremes. Let's say constructive and analytical criticism. It shouldn't be humiliating us.

"Putin spoke to me after the Spain match. When the president calls you, it makes you comfortable. It's an extra boost in terms of motivation."

manager Cherchesov says the NT have been boosted by the support of president Vladimir Putin ahead of July 6, 2018

Russia's run has captivated a nation after they qualified from Group A and eliminated Spain, but Cherchesov – who is unsure if returning star Alan Dzagoev will be named in the starting XI after injuring his hamstring in the tournament opener – is remaining grounded, with Croatia looming as a dark horse to win the World Cup.

"We have our goals and missions," he said. "We have a goal before tomorrow's match. We have to play and achieve results. We are not daydreaming."

Amid the euphoria in the media, Cherchesov added: "I'm telling you I'm trying not to watch TV or read newspapers. Concentrated on the job. Same for the players. It's a good story to remind ourselves of the match against Spain. But now we have to look forward. It's a different game. It's a different level.

"We are not the people to be euphoric. Journalists can be. Spain were one of the best teams. Now anyone can go home and we have to perform from the start."