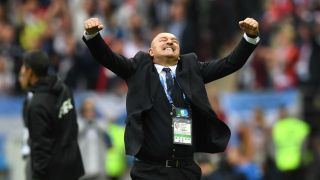 Talk of Salah dominated Cherchesov's pre-match media briefing at Krestovsky Stadium, with the Liverpool star having been declared fit to return from the shoulder injury he sustained during last month's 3-1 Champions League final defeat to Real Madrid.

The Egyptian Football Association similarly declared Salah was ready to take on Uruguay in their opening 1-0 Group A defeat but experienced boss Hector Cuper opted not to risk his prized asset.

Salah, 26, tore Premier League and Champions League defences apart during a stunning debut season at Anfield that yielded 44 goals, but Stanislav is confident he has the remedy as his team look to build upon an emphatic 5-0 win over Saudi Arabia.

"What can I say? I trust in my team," he said. "I believe in my players and I will give you a simple answer.

"We are ready to do this and we will do this."

Cherchesov dismissed the notion that roughhouse tactics would come into play and defended Madrid captain Sergio Ramos against an accusation that he purposely caused Salah's injury.

"Is someone going to behave as Ramos behaved? I don't understand the question," he replied.

"I saw that he was holding the cup of the Champions League and tomorrow there will be no cup.

"I believe that Ramos did not do this on purpose. This is a contact sport and, as I understand, no one injures people from other teams on purpose."

9 - Liverpool mustered nine shots in the first-half with Mohamed Salah on the pitch, and none after he was subbed off. Setback. May 26, 2018

The man charged with thwarting Salah as Russia's last line of defence is goalkeeper and captain Igor Akinfeev.

The CSKA Moscow man bristled at persistent references to Salah as he sat alongside his coach.

"First of all I will tell you about my team," he said. "I believe we should pay more attention to the Russian team. We have our own tasks, our own missions and so on.

"We know there will not be mannequins against us. These will be living beings. It is not only Mo Salah who will be playing against us. They have another 20-plus players. We will see what will happen."

Asked whether he was looking forward to playing against Salah, Akinfeev snapped back: "I don't even know how to start preparing how to respond to your question, frankly.

"I would prefer that my team win tomorrow, that's my response."

The winning feeling deserted Russia during their preparations – something a comparatively jovial Cherchesov made light of when their dismal run of friendly form was brought up.

"We have won one game already here at the World Cup, so what is the next question?"

Soon enough, it will be Salah posing them.