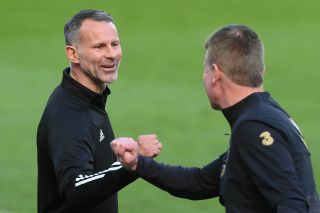 Ryan Giggs has defended his decision not to strengthen Wales’ squad after losing four players for the Nations League clash with Bulgaria in Sofia.

Wales have lost four players from their original 27-man squad and are short of forward options with David Brooks, Kieffer Moore and Hal Robson-Kanu dropping out alongside suspended midfielder Joe Morrell.

Giggs says being in a Covid-19 bubble has made the situation “more problematic”, although other countries have called up players after being hit by withdrawals.

But Wales manager Giggs insists he has enough players at his disposal without attempting to draft others in to bolster his squad.

“We all got tested (for coronavirus) after the Ireland game on Sunday,” Giggs said.

“After that it would have been very difficult (to bring players in). Players would have had fly to Dublin and then Bulgaria.

“We just have to deal with the players we’ve got, which is fine.”

Asked if he should have called up a replacement when Robson-Kanu was ruled out with a broken arm two days before last Thursday’s England friendly, Giggs said: “We had 26 players so that was fine.

“I felt with Dan James, Harry Wilson and Brooksy not involved in the England game that they would be three new players coming into two games.

“So we felt we were fine in that respect.

“It has been more problematic because of the Covid situation. But that wasn’t solely the reason, we felt we had enough players.”

Wales head to Eastern Europe top of Group B4 with seven points from three Nations League games and yet to concede in the competition.

Giggs has reined back on his initial attacking approach – Wales scored 10 goals in his first four games – to tighten up a defence which has seen goalkeeper Wayne Hennessey keep five clean sheets in six games.

“I always feel that we need to get the defensive aspect as we do have players who can hurt teams,” Giggs said.

“It is always about getting the balance. You don’t want to give chances away but we need to be better going forward.

“That is about creating relationships between players whether full-back, winger, number 10, centre-forward, midfielders, and that is difficult with the turnover of players we get. But it will come.”

Bournemouth defender Chris Mepham has boosted Wales by being declared fit after missing Sunday’s goalless draw with the Republic of Ireland in Dublin.

Mepham picked up a knee injury in the England defeat at Wembley.

“It’s not easy with this being the third game,” Giggs said. “But every country’s in the same boat so you have to deal with it.

“There is a lot of juggling with players and making sure they’ve had enough minutes, but also that they’re still sharp.

“We have to be ready and we have been in the two (Nations League) games so far. We’ve done well, a draw and a win, and we’ve been solid.”