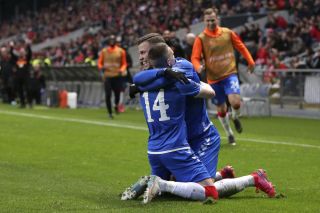 Ryan Kent rocked Braga as his winner under the Estadio Municpal’s cliff-face saw Rangers climb into the Europa League’s last 16.

Steven Gerrard’s team have stumbled out of the title race back home but in Europe they continue to scale new heights after claiming a 1-0 win in Portugal.

The Light Blues suffered a relapse of their penalty curse as Ianis Hagi became the fourth Ranger this season to miss from the spot just before half-time.

They had already wasted two other golden chances to stretch last week’s 3-2 first-leg lead but Kent settled any nerves as rifled home 16 minutes after the break.

There were 5,000 travelling fans packed into Braga’s unique home, which boast just two stands, and they erupted with joy as the final whistle confirmed their place in Friday’s draw.

Gerrard dropped a surprise an hour before kick-off as he benched Nikola Katic following his Perth horror show against St Johnstone.

George Edmundson took his place but there was no repeat of Sunday’s sloppiness as he and Connor Goldson stood firmer than the massive rock looming over one end of the pitch.

The former Oldham forward had a wobble from kick-off as he gifted the ball straight to last week’s opening scorer Fransergio but from there he was solid.

Florian Kamberi – deputising for the suspended Alfredo Morelos – fell into Braga’s offside trap three times early on but when the hosts failed to time their press right, Gers knew there would be opportunities to strike in behind like last week.

It took just nine minutes for Braga to over-commit and Kent pounced to slip Scott Arfield through – but his pass to Kamberi did the striker no favours and he could only fire at goalkeeper Matheus.

It was a massive chance and they quickly blew another. Hagi robbed Raul Silva out wide before lifting the ball over David Cormo with a delightful dink.

He could have gone himself on a tight angle but pulled back for Kent, who dragged the ball horribly wide.

Hagi fired a free-kick well over as Gerrard struggled to hide his frustration on the touchline.

Rangers knew one goal could be good enough for Braga and there were warnings as Allan McGregor had to tip over a Paulinho header, while Kent got a blast from skipper James Tavernier after his loss of possession saw the Portuguese side romp forward, with Nuno Sequeira’s cross bouncing off Fransergio before flying just wide.

There were 90 seconds left of the half when Rangers were gift-wrapped yet another huge opportunity as Silva handled Kent’s corner.

Swedish referee Andreas Ekberg was quick to award the spot-kick but Hagi was then forced to stand and wait for almost three minutes before he could take the kick as VAR verified the award.

The Romania international eventually got the go ahead but his effort was brilliantly stopped by Matheus’s out-stretched arm as Hagi became the fourth Rangers player to miss from the spot this season.

Gers trudged down the tunnel wondering if they were about to let the last 16 slip through their fingers.

Kent could not control a shot from a Kamberi cross – but his next effort after 61 minutes was inch-perfect.

Goldson and Ryan Jack did well to reclaim possession before Hagi launched another ball over Braga’s high line for Kent.

The £7million man had to outpace Sequeira but – having won the race – he drilled a left-footed finish into the corner to spark scenes of joy in the upper tier.

A second would have taken away the threat of Braga’s away goals but Arfield had his celebrations cut short after bundling home from an offside position.

Matheus denied substitute Sheyi Ojo while McGregor had to tip the ball over his crossbar in stoppage time as it dropped dangerously from the sky.

Braga fired corner after corner into the box but Rangers refused to budge as the final whistle sparked more celebrations.