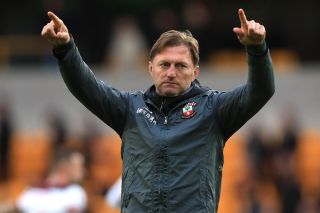 Ralph Hasenhuttl wants Southampton to halt their dreadful home form by grinding out a “dirty win” against high-flying Leicester.

Saints have taken a single point from four Premier League matches at St Mary’s this season and not tasted victory in front of their own supporters since April.

Hasenhuttl’s side have already hosted leaders Liverpool, Manchester United, and Chelsea during a tough run of fixtures on home soil.

Brendan Rodgers’ third-placed Foxes will provide another stern test during Friday’s televised clash on the south coast and Southampton boss Hasenhuttl feels the time has come to stop the rot.

“When you see the performances we showed at home and what we get for this, it was not enough, I think,” said Hasenhuttl

“We played sometimes better than the result was.

“The time has come to get a dirty win. Make this goal and then defend with everything you have and make it as nasty as possible for the opponent to get something here.

“I think the players know what it’s about tomorrow and we’re going into this game with all we have.”

Southampton have averaged a goal a game from their opening nine top-flight fixtures.

In-form striker Danny Ings is the only Saints player to register on the score-sheet in the league during the past month.

While Hasenhuttl does not want his team to become over-reliant on top scorer Ings, he is more concerned about frailties at the other end of the field.

“We nearly scored in every game – only once sometimes – but scoring was not a big problem,” said the Austrian.

“I think the more important thing is that we are more stabilised. In the four home games we were four times in the back (behind), this is not easy.

“It’s more important that we keep the game open and we are balanced and we don’t concede a goal because we know we can always score.”