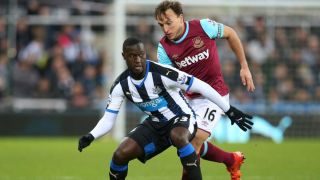 Henri Saivet has only just arrived at St. James Park, but the Newcastle United new boy is relishing the challenge of helping his new team retain its Premier League status.

Newcastle manager Steve McClaren enlisted the services of the former Bordeaux midfielder to aid his team's bid to avoid a second relegation in seven years.

Saivet was only used as a substitute in Newcastle's win over West Ham United - in a match that fellow new signing Jonjo Shelvey took most of the plaudits for a commanding midfield display - and the Frenchman did not look out of place on a Premier League field.

Now, Saivet has set his sights on starting regularly for Newcastle.

"I think it is a big challenge for myself and Jonjo Shelvey who has also arrived. It is our job to make sure the team moves up the league and we have to contribute to that," Saivet said.

"I think for me I can bring a carefree attitude, and some aggression in the tackle in midfield."

Saivet said he is happy to put in a defensive shift but sees his real role as providing the required ammunition to score the goals that will keep Newcastle up.

"I am a ball player as well and giving passes to Ayoze Perez and [Georginio] Wijnaldum to exploit their talents and bring the best out of them," he said.

"The image people have in France of Newcastle is that it is massive club, it is just struggling to get on track. Everything we like about Newcastle.

"It is a little bit of a shame that they are not at the top of the Premier League where they deserve to be."

Saivet said the decision to make the switch was an easy one after glowing recommendations from fellow French players Gabriel Obertan and Yoan Gouffran.

"My friends Gabby Obertan and Yoan Gouffran only ever said good things about Newcastle as a club," Saivet continued.

"If I am called upon I will be out there and try to do my best. What matters more than anything is that there’s no player bigger than the club.

"That’s all that is important but I am ready when called upon and I will make sure I give my best."