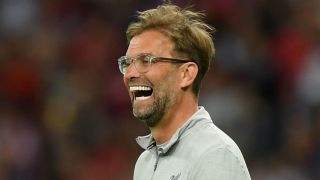 The Egypt international signed a long-term extension - reportedly for five years, with no release clause included - following a sensational debut season on Merseyside.

Salah scored 44 times in 52 appearances in 2017-18, with 32 of those goals in the Premier League as he claimed the Golden Boot to help Liverpool secure a top-four finish, while they also reached the Champions League final.

Klopp declared the deal to be a deserved reward for the PFA Players' Player of the Year winner's stellar performances following his arrival from Roma, and has warned Liverpool's rivals Salah can still get even better.

The German manager also believes the 26-year-old's decision to commit his future to the club sends out a message of intent as they look to make Anfield a home for "world-class talent".

"I think this news can be seen for what it is; rewarding a person who performed and contributed greatly for the team and the club last season," Liverpool's manager told the club's website.

"It demonstrates two things very clearly also - his belief in Liverpool and our belief in him.

"We want world-class talent to see they have a home at Anfield where they can fulfil all their professional dreams and ambitions - we are working hard together to achieve this.

"When someone like Mo Salah commits and says this place is my home now, it speaks very loudly I think.

"Equally, our commitment to him says we see his value and want him to grow even more and get even better within our environment."

Salah's deal was announced as Liverpool's first-team squad returned to training, though he was not present after playing for his country at the World Cup in Russia.

However, new recruits Naby Keita and Fabinho, who have arrived from RB Leipzig and Monaco respectively, were among a 26-strong group to report for duty.