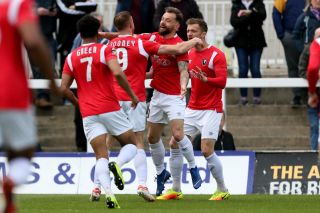 Salford booked their place in the National League play-off final with a penalty shootout victory over Eastleigh.

Salford keeper Chris Neal saved the decisive spot-kick from Chris Zebroski after the two sides had battled out a 1-1 draw over 120 minutes.

The home side had the best chances of the first half, with Adam Rooney forcing a superb save from Luke Southwood before Carl Piergianni headed Salford ahead two minutes before half-time.

Alex Wynter crashed a volley against the bar for Eastleigh and Neal saved brilliantly from Mark Yeates before Paul McCallum headed the visitors level in the 57th minute.

Scott Wiseman missed a great chance to win it for Salford in the last minute of normal time and Emmanuel Dieseruvwe hit the post in the extra period before the home side held their nerve to book their place at Wembley.