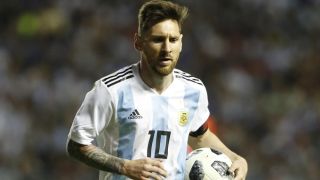 Messi inspired his side in Buenos Aires on Tuesday, scoring a hat-trick and setting up Sergio Aguero for Argentina's fourth.

The Barcelona star's third was set up by Pavon, the substitute doing brilliantly down the left before cutting back for Messi to complete his hat-trick.

The duo's combination has impressed Sampaoli, who praised their connection after the convincing friendly win.

"Cristian is a player who has very special characteristics for communicating with Messi," he said.

"He goes to space, he is offering all the time and he has an important dynamic."

Also having an impact off the bench after being introduced on the hour-mark was Aguero, who got on the scoresheet having replaced Gonzalo Higuain.

"Haiti didn't have so many players behind the ball and that boosted their chances."

Argentina face Israel in another friendly on June 9 before beginning their World Cup campaign against Iceland seven days later.