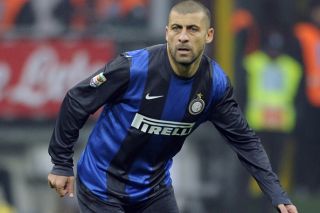 Coach Walter Mazzarri confirmed Samuel, 35, would make his first league appearance since April, although he is unsure whether he will be restricted to a substitute cameo or a start at the Stadio Atleti Azzurri d'Italia.

"Samuel will definitely play, I want to give him a chance, he's training well and is an important player," Mazzarri said.

"I need to work out where to use him.

"Injury kept him out for a long time but he'll be involved tomorrow.

"Samuel, being left-footed, could play on the left or in the centre of the back three.

"I'll speak to the three from the backline to gauge their fitness levels and one will be rested, then we have Udinese four days later."

Missing once more for Inter will be defender Hugo Campagnaro (right leg), however, Mazzarri refused to blame his defenders for their inability to keep a clean sheet in their past five without the Argentine stopper.

"I've not seen the other guys make mistakes, Rolando in this case, but it depends if you consider bad luck – like Radja Nainggolan's deflected shot – as mistakes," Mazzarri said.

"I look at the unit as a whole and at individual players, and from this point of view I've not seen any great difference with or without Hugo.

"If a player is missing, I need to pick someone else, I can't just cry about it.

"We've conceded some goals in certain ways, but that's not because a particular player is missing."

On their 76-kilometre trek north-east to tackle their local rivals, Mazzarri said it would be a tough road trip despite the relatively close proximity.

"Bergamo has always been a tricky place to go to and not only for Inter," the former Napoli man said.

"It's a unique stadium, you feel the crowd.

"It's a tough place to play and they're a group of players who have been working with the same coach for a while, they play good football and have some quality players.

"We need to be very focused, something I always stress, and we saw in our last match that when we're all together and focused we can play good football and cause problems for anyone.

"But we're always at risk once we relax."