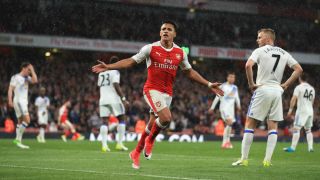 Arsene Wenger has hailed Alexis Sanchez's desire after he played through the pain barrier to help Arsenal beat Sunderland 2-0 at Emirates Stadium.

The Chile international was doubtful for Tuesday's Premier League encounter due to a knock, but Wenger eventually opted to include him in the starting XI regardless of his physical issues.

Wenger's gamble paid off as Sanchez scored twice after the break to keep Arsenal's slim top-four hopes alive and the Gunners boss had nothing but praise for his star attacker after the final whistle.

"I made the decision to start Alexis at 4pm," Wenger said at a news conference.

"Once he is on the pitch and gets the ball, he always becomes a devil and forgets the pain.

"Nobody questions his desire and his quality. It shows as well that if you look at his numbers, he has developed here as a player and has become a top-class player and has not wasted his time here.

"Hopefully that will last for a long time."

Sanchez's double against Sunderland saw him take his tally for 2016-17 to 23 goals in 37 Premier League appearances, just one behind Everton striker Romelu Lukaku in the race for the top scorer title.