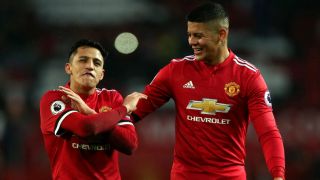 Marcos Rojo is relieved to be playing on the same team as new Manchester United star Alexis Sanchez after admitting the pair "always ended up kicking each other" as opponents.

Sanchez left Arsenal for Old Trafford in January in a swap deal with Henrikh Mkhitaryan, having spent almost four years in north London.

Argentina international Rojo has often faced Chile forward Sanchez at both club and international level and he admits their aggression would often get the better of them.

"I have faced him a number of times, playing either against Arsenal or Chile," he told Inside United. "We always seem to have fought on the pitch so it's better we're on the same side as we always ended up kicking each other.

"That's my style and the way I play. I've been this way since I was a kid. I am very aggressive and emotional on the pitch. I'm a very typical South American player. We're very aggressive. It is something in my blood. I'm not going to change.

"But Alexis is a great person, now I've got to know him. He is a fantastic player and I hope he brings his maximum level to United. He's settling in well. He's got a new house. In fact, it's the one I had when I first arrived at United."

Rojo has struggled for regular playing time this term, having only recovered from a serious knee injury in November, but he says he is growing in confidence under manager Jose Mourinho and determined to play a regular role in the build-up to the World Cup.

"It was great coming back after a difficult injury," he said. "There was a lot of hard work for me to do and there were difficult times during that period so, after being out of the team for six or seven months, it was an immense feeling to be back on the field.

"I'll be 28 in March and it is at the age when you start to show how much you've matured as a player and show how much you have learned. Every year I feel more confident, knowledgeable and more certain of my abilities.

"My aims for the rest of the season are to play as many games as I can and then win trophies. Last year we won three trophies [the Community Shield, EFL Cup and Europa League] so it would be great to do something similar this year.

"It would be very important for the club and me personally so I can go to the World Cup with confidence."

Rojo now feels at home in Manchester having initially struggled to adapt after his move from Sporting CP, and he is determined not to leave England before winning the Premier League.

"I feel my thinking in the next few years must be to try to stay as long as I can and to be here at one of the biggest clubs you can be at," he said. "My family is really happy to be here and I am also very pleased to be here.

"The challenge in the next few years is to win the Premier League. I don't want to leave England without winning the title.

"At first, it's true it was difficult but it always is difficult getting used to a new city. Now, I've found a love for the city. My daughters are very happy here.

"My eldest daughter is at school at the moment so, when I come in to train and work hard, I get home and knowing my wife and daughters are happy contributes to your general feeling."