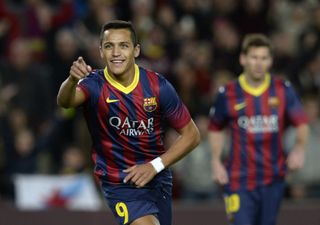 The Chile international is in London ahead of their friendly against Roy Hodgson's side on Friday and he was keen to set the record straight.

The 24-year-old was quoted as labelling the England players "soft" and "not contenders for the World Cup", but he has denied those claims and insists they were not his words.

Both sides secured their place at Brazil 2014 last month and Alexis feels England will be contenders at the finals.

"I want to clear this up as I never gave this interview," he said. "I am very annoyed and upset. I deny everything.

"It gives me great pride to face England, they are one of the strongest teams in the world.

Alexis is relishing the chance to play at Wembley and is confident Chile can record a victory.

The two sides have not met since 1998, when Chile beat England 2-0 at Wembley thanks to two Marcelo Salas goals, and Sanchez admitted that game was still an inspiration for the current squad.

"That game (in 1998) is historic for Chile," he added. "It was something amazing what Marcelo did.

"We hope we are able to do that on Friday.

"It would be fantastic to score a goal and to help my team win. Any Chilean player would love to score at Wembley."