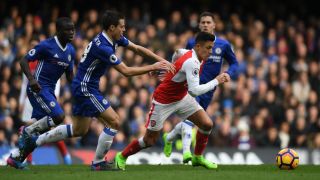 Antonio Conte has again insisted it would be "disrespectful" to both Arsenal and his players to discuss the possibility of bringing Alexis Sanchez to Chelsea.

Sanchez's contract at Emirates Stadium expires in 2018 and, with Arsenal enduring a tough season as they lie sixth in the Premier League, speculation has suggested the Chile international could leave.

And following quotes from Sanchez stating he is happy in London, capital rivals Chelsea have been linked to Arsenal's star man - Conte reportedly making the 18-goal forward a top target.

However, Conte still would not be drawn on a potential swoop for the 28-year-old when asked if Sanchez might be interested in joining the club.

"You know I don't like to speak about other players of other clubs," he told a pre-match news conference ahead of a key clash with Manchester City.

"It's disrespectful for the other club and, above all, for my players. It's not the right moment to speak about this."

Conte says he doesn't like to speak about players from other clubs, adding it is disrespectful to them and his own players too. April 4, 2017

Meanwhile, Conte is unsure whether wing-back Victor Moses will be ready for Wednesday's game, with a decision on the 26-year-old - a surprise key figure this term - set to go down to the wire.

"I don't know if Victor Moses will be available," he said. "There is another day to check the situation.