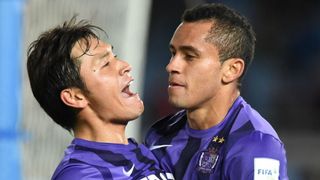 Douglas scored twice in the final 20 minutes as Sanfrecce Hiroshima came from behind to defeat Guangzhou Evergrande Taobao 2-1 in Yokohama, sealing third place in the Club World Cup.

Paulinho had put Luiz Felipe Scolari's men on course to become the first Chinese team to finish third in the competition, but Douglas struck twice with two late headers.

That means Sanfrecce seal third spot after finishing fifth in their only other participation in the competition back in 2012. Guangzhou, meanwhile, fail to improve on their fourth-place finish from the 2013 tournament.

Paulinho had given Scolari's side the lead after just three minutes. A short corner allowed Li Xuepeng the chance to put a quality ball into the box which Elkeson headed on target, only to see his effort pushed away by Hiroshima keeper Takuto Hayashi.

Hayashi's punch only fell to Gao Lin, who lashed at goal from a half-volley, skewing his effort in the direction of Paulinho, with the former Tottenham midfielder reacting brilliantly to turn the ball home with his head and score his second of the tournament.

Far from discouraged, going behind early on served as a wake-up call for Sanfrecce, who took the game to Guangzhou for the rest of the half, creating a number of chances they could not capitalise on.

Evergrande keeper Li Shuai did brilliantly to deny Hisato Sato's flicked header, before Li had to rely on defender Mei Fang to make a goal-line clearance to deny Takuya Marutani's effort which had the shot stopper beaten.

After the break, Li could only save Takuma Asano's shot at the second attempt as Sanfrecce came close to an equaliser, while Ricardo Goulart headed just off-target from six yards at the other end in the best chance Guangzhou had to double their lead.

Sanfrecce found a leveller with 20 minutes remaining. A Yusuke Chajima corner was whipped in and made its way to an unmarked Douglas at the far post, with the Brazilian heading home from close-range.

The Japanese side had all the momentum and they could have moved ahead after indecision between defender Zhang Linpeng and his keeper allowed Chajima the chance to shoot just wide.

A second goal was coming and it duly arrived with seven minutes to play. A cross from the right found Asano, whose looping header struck the crossbar, allowing Douglas to pounce and head home the rebound.