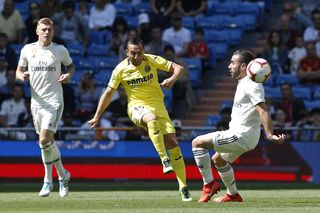 Villarreal’s Santi Cazorla has been recalled to Spain’s squad after four years ravaged by injury.

The former Arsenal midfielder played only 23 league games across his final two seasons in north London due to a serious and recurring Achilles injury, which almost forced him to retire.

But he has bounced back since returning to LaLiga, making 45 appearances in all competitions this season and helping the Yellow Submarine to the Europa League quarter-finals.

That form, including seven goals for the campaign, has earned the 34-year-old a recall to Luis Enrique’s squad for Euro 2020 qualifiers against the Faroe Islanda on June 7 and Sweden three days later.

Real Sociedad’s Mikel Oyarzabal also returns for the first time since making his only senior international appearance as a substitute against Switzerland in 2016.