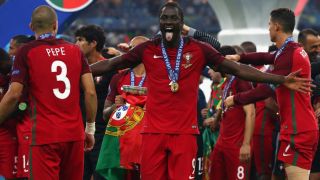 Santos saw his team's prospects suffer a body blow when captain and talisman Cristiano Ronaldo limped out of the action with a first-half knee injury.

They came on strongly during the additional period and, after Raphael Guerreiro struck the crossbar with a free-kick, replacement striker Eder arrowed an unstoppable 25-yard strike into the bottom corner to spark wild celebrations.

The 28-year-old flopped badly at Swansea City last season before reviving his career in France with Ligue 1 outfit Lille and Santos revealed Eder was not short of confidence when he entered the fray at the Stade de France.

"When I took Cristiano out I thought of putting Eder on immediately but at that moment I thought we should change the game, so I moved Nani to the middle for him to play his fast game," the victorious tactician explained.

"But we needed someone to play up front and to let the team come up.

"We needed someone to play up in the air to make it harder for the French later on.

"When he came on he said 'gaffer, I am going to score' and the ugly duckling scored - he is now a beautiful swan."

Portugal were often accused of being ugly as a collective during a campaign they ended as champions despite winning only one of seven matches inside 90 minutes.

Ronaldo, stricken following an early challenge from Dimitri Payet - a tackle Santos felt should have been punished by a card from referee Mark Clattenburg - remained on the touchline cajoling his team-mates alongside the coaching staff.

Santos felt this was testament to the team spirit Portugal have managed to foster.

"It's hard to describe the players' emotions. It's an incredible emotion and we need to stress [the effort of] our skipper," he said.

"Him being there in the locker room and on the bench, it was very important for us the way he reached the lands and incentivised them. He believed, just like myself, that tonight was our night.

"On his behalf I would like to thank all the players for believing because tonight was out night."