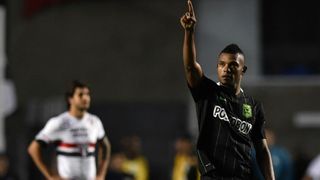 Atletico Nacional struck late against a 10-man Sao Paulo to claim a 2-0 advantage after the first leg of their Copa Libertadores semi-final on Wednesday.

The game appeared headed for a scoreless draw at the Estadio do Morumbi before the Colombian side found the net twice in the final 10 minutes through Miguel Borja.

The 23-year-old - making his Atletico debut - slid a shot past Sao Paulo goalkeeper Denis in the 82nd minute after being played in by Macnelly Torres.

Borja then doubled the visitors' advantage in the 88th minute, finishing off a clinical move after being set up with a Marlos Moreno back heel.

Both of Atletico's goals came after Sao Paulo centre-back Maicon was sent off in the 73rd minute.

The 2-0 win for Atletico, with two vital away goals, gives them a big advantage heading into next week's return leg in Medellin as they look for a first final appearance in 21 years.

Both sides seemed to be content to sit back and absorb pressure as the game went on, but it was not until Maicon's sending off - receiving a straight red for pushing an opponent in the back of the head - that the momentum swung in Atletico's favour.

Knowing they could use their extra-man advantage to seal a late winner, Atletico piled men forward, resulting in Borja finishing off an inch-perfect pass from Torres with eight minutes remaining.

The forward was then in again six minutes later, slotting the ball past Denis after a superb back heel from Moreno set him up, with Torres once again involved in the build-up.

The result leaves Sao Paulo on the brink of elimination, needing to score at least twice in Medellin to have a chance of making the final for a seventh time.