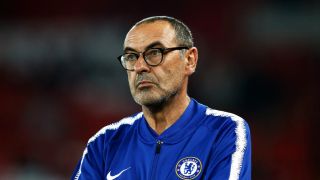 Maurizio Sarri says Chelsea's habit of following title-winning Premier League seasons by flopping is "strange" and he is studying the reasons behind their boom-bust tendencies.

Although the Blues have lifted the Premier League trophy in two of the last four seasons, they have followed each of those successes with a pair of atrocious title defences.

Sarri was subsequently appointed as the successor to his fellow Italian and the former Napoli head coach is trying to work out why Chelsea tend to struggle after superb seasons.

"So the numbers of this group are a little bit strange. I need to understand why. I am studying. I think that these numbers tell us something. I don't know what, at the moment.

"But I want to understand and I want to help my players to be at the same level. Maybe if you are lucky or unlucky, you can gain 85 points or 80, but the difference in one season is 43 points!

"I have to understand why. Then, if I am able to do it, I have to help my players be at the same level for a long period.

"I don't know [the reason], because they usually have training very well with continuity. So the attitude is good. There is probably something from the mental point of view. I have to understand it."

Chelsea host Liverpool in the Premier League on Saturday, Sarri's side seeking a second win over the Reds in four days after knocking them out of the EFL Cup at Anfield.

But Jurgen Klopp's men travel to Stamford Bridge having won all six of their Premier League matches in 2018-19, with Sarri conceding his team will find it hard to stop Sadio Mane, Roberto Firmino and Mohamed Salah.

"It's very difficult at this moment to do that. We are trying to work by videos. And I think we will improve more in the next two months.

"Of course, today, it's very difficult to play against Firmino, Mane and Salah, but that's difficult for everybody in Europe, playing against them. It's not a problem only for us."

Despite being appointed by Chelsea in July, Sarri is yet to name a permanent captain.

Last year's skipper Gary Cahill has made only one substitute appearance in the Premier League this term with Eden Hazard and Cesar Azpilicueta among the options for the armband.

"No, no, no. Wait," Sarri said. "Yes, but I want to speak with my club face to face before I tell you my decision.

"I think it's right the club knows my decision before the journalists. It has been impossible in the last two or three weeks, but I think it will be possible next week."

Asked if Hazard is a contender for the captaincy, Sarri added: "I want to speak to my club before. Sorry."