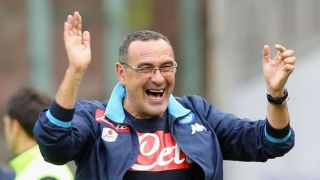 Napoli coach Maurizio Sarri was unmoved by Lorenzo Insigne's reaction to being substituted during the 2-0 win over Palermo at the Stadio San Paolo as his side moved second in Serie A.

Goals from Gonzalo Higuain and Dries Mertens ensured Napoli three points on Wednesday as Sarri's men made if five league wins in a row.

Insigne was replaced shortly after the hour, the Italian venting his frustration, while replacement Mertens also produced an apparently angry celebration after his goal.

"It can happen that someone is annoyed when they have to leave the game but Lorenzo needs to explain this lack of respect towards his teammates.

"If Mertens gets angry like this all the time, after coming on and scoring, that's fine with me."

Alongside Insigne and Mertens, Higuain's form has been key to Napoli's strong start this term - Sarri's men are unbeaten since their opening-day defeat to Sassuolo.

"It is a very important victory. We achieved it together," Higuain added.

"We must keep this pace, we have been working really well and we have to do our best in order to continue like this. We have proved that we can fight against any opponent and being constant with our results.

"Without continuity you don't go too far, so we have to improve and focus on every single game.

"Now our team is fit despite the season's demanding schedule. In our group, we are all equally important. This is the secret to achieve great results."