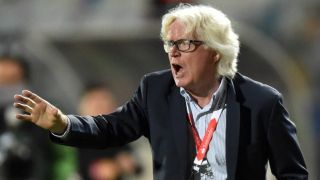 Winfried Schafer lamented a "crazy goal" in Jamaica's 1-0 Copa America loss to Paraguay, but said his side had to improve their abilities up front.

Duwayne Kerr came out to deal with a long ball from Paraguay's Victor Caceres, the goalkeeper's headed clearance going straight at the awaiting Edgar Benitez - and the ball deflected off the attacker's thigh and looped back into the unguarded net.

Schafer claimed his side had good enough chances to equalise, but conceded they needed to find a better system up front prior to their World Cup qualifiers in August and September.

"Two matches and no goals for us, you can see our problem," Schafer told a news conference.

"We lost against Uruguay via a free-kick, we lost today due to a crazy goal.

"Our strikers have to move to give more options for the midfielders, defenders ... I hope I find a team that can play like this against Argentina.

"This tournament is for us to find a very good team for the qualification matches in August, September."

Schafer hinted his side might have to take a leaf out of conquerors Paraguay's books, as Ramon Diaz's men played several corners short in a bid to meddle the Jamaican defence.

"We have many free-kicks in the first half, and corners," the German coach said.

"Only one situation was dangerous for Paraguay - we need more surprises with our free-kicks, new ideas, not every time the ball has to go towards the goal [face].

"I hope, in training, we can discover a new idea against Argentina."

He added: "The second half was the same as our first half against Uruguay.

"When you want to play in a high level, at a Copa America, you have to always play 100 per cent, fighting.

Jamaica take on Argentina in Vina del Mar on Saturday.