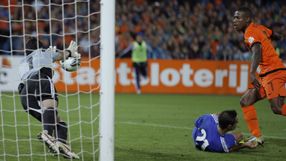 Rafael van der Vaart, replacing the injured Wesley Sneijder, opened the scoring after seven minutes when he turned away from his marker and finished with a well-placed shot.

Klass-Jan Huntelaar, preferred to Robin van Persie in the central striking role, headed home the second goal after an assist from winger Jeremain Lens, who then combined with forward Schaken who made it 3-0 from close range on 50 minutes.

"It was tough against such a defensive opponent but still we should have done better," coach Louis van Gaal told reporters.

"We started well with two quick goals but we couldn't maintain the tempo and the same happened after the break."

Van Gaal was pleased, however, with the displays of wingers Lens and Schaken.

"Lens played an excellent match and I replaced him as I will need him on Tuesday," added Van Gaal.

"Schaken was a bit unlucky with his final pass but considering that he always had to do with a least two markers I'm also satisfied about his debut."

The Dutch, who won all eight of their 2010 World Cup qualifiers, top Group D in 2014 qualifying with nine points after three matches, ahead of Romania on goal difference.

The group pacesetters clash in Bucharest on Tuesday with Van Persie likely to return for the Dutch.