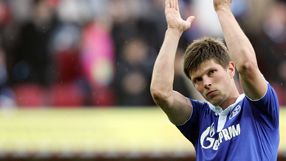 Sebastian Langkamp gave the hosts a sixth-minute lead, drilling in a powerful header that went in off the bar as Augsburg looked to seal their survival with two games left.

Schalke forward Klaas-Jan Huntelaar, however, broke his unusual two-game goal drought with his 25th league goal to join Bayern Munich's Mario Gomez at the top of the scoring chart.

He chased down a deep cross and raced clear of two defenders with a stunning first touch before slotting in from 11 metres.

The result allowed Schalke, with their first win after two losses, to move up to 58 points, two ahead of fourth-placed Borussia Monchengladbach while Augsburg moved four points clear of the relegation play-off spot.

"We are lucky to have Klaas-Jan," said Schalke coach Huub Stevens. "He got that equaliser out of nothing."

"We had wanted to win but after the early goal that became very hard. That should not have happened," said Stevens.

In the only other game on Sunday Freiburg ended their relegation fears after battling to a goalless draw at Hannover 96, who saw their chances of Europa League action next season take a hit.

Hannover are in seventh place on 45 points with Freiburg on 37, seven ahead of the relegation play-off spot.

Borussia Dortmund retained the Bundesliga title on Saturday with two games to spare after beating Gladbach 2-0 to open up an eight-point lead over second-placed Bayern Munich who were 2-1 winners at Werder Bremen.