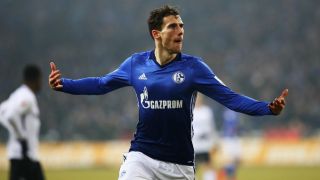 Schalke general manager Christian Heidel has hit out at rumours that Bayern Munich have agreed to sign Leon Goretzka.

A Sky Deutschland report on Saturday, shortly before Schalke's match with Hamburg, claimed the Bundesliga champions have struck a deal that will see the highly-rated 22-year-old move to the Allianz Arena at the end of the season.

Heidel, however, is unhappy with the speculation and says that talks over a new contract for the midfielder are ongoing.

"It's not decent for Sky to make an announcement, which is completely baseless, an hour before kick-off," Heidel said. "People shouldn't spread this information as if it's a done deal when it's merely speculation.

"It's absolute nonsense. Bayern have not even made contact with Schalke and I've had good talks with Leon Goretzka and his advisor [Jorg Neubauer] so far.

"He has a great opportunity to become the face of Schalke over the next few years."

Goretzka's contract reportedly expires in 2018, meaning Schalke must negotiate an extension or choose to sell him in the next transfer window in order to avoid the risk of losing him on a free transfer.

Heidel accepts that the Germany international will join a bigger club in future but he says that no decision has yet been made, "otherwise he would have extended his contract".

He continued: "I realise it is inevitable that Leon Goretzka will probably at some stage move to a club at a higher sporting level than Schalke.

"But for a young player like Leon, it's definitely a question of when. If I judge him correctly, he would have said something to me if he had already made his decision to join another club."

Goretzka, who signed from VFL Bochum in 2013, has made 40 appearances in all competitions this season, scoring eight times.