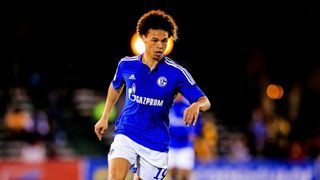 Schalke have warned Leroy Sane's reported suitors there is no release clause that can be activated to trigger his release, as reports continue to link him with a move to Manchester City.

The 20-year-old Germany international has been heavily linked with the Premier League club in recent weeks, having become one of the Bundesliga's hottest prospects since making his Schalke debut in April 2014.

Sane's deal is due to expire in 2019, although general manager Horst Heldt recently suggested that even City did not have the financial capability to lure the Schalke man to the Etihad Stadium.

Amid fresh reports of an apparent exit clause in Sane's contract, Heldt denied the suggestion at Schalke's training camp in Florida.

"Leroy Sane has no exit clause that can be used during the winter nor the summer," he said.

Schalke play friendlies against Atletico Mineiro and Arminia Bielefeld before returning to league action against Werder Bremen on January 24.

However, Andre Breitenreiter will be without captain Benedikt Howedes for the restart after pulling his hamstring on Monday.

"The training camp is now over for the 27-year-old, who has returned home to Germany," read a Schalke statement.

"Howedes will miss the Bundesliga restart and will be out of action for the Royal Blues for several weeks."