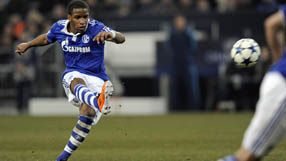 Leading up to their qualification for the last eight for only the second time, Schalke had to endure months of sharp criticism following a lacklustre Bundesliga season.

Only days ago the future looked bleak with the team struggling just five points off the relegation play-off spot in the Bundesliga and hopes of international football quickly fading as fans directed their anger against coach Felix Magath.

Hours before the game against Valencia media reported Schalke had decided to terminate Magath's contract at the end of the season, two years early with the coach saying he knew nothing about it.

Their 4-2 aggregate win over Valencia after Wednesday's victory in front of a surprisingly supportive home crowd and a 1-0 win over holders Bayern Munich last week that sent them through to the German Cup final seem to have turned the tide.

"The results in the Bundesliga were not so good but then we made the German Cup final and now the last eight in the Champions League so things are looking up and such moments make you feel very good," Schalke goalkeeper Manuel Neuer said.

"We are now among the top eight teams in Europe and we want to go into the next round fighting as well as bring this confidence into the Bundesliga," said Neuer, whose stellar form this season has been one of the team's few highlights.

The Champions League last eight spot means the debt-ridden club is also getting an unexpected financial injection, a fact not lost with management, who said they would comment on the Magath issue in the coming days.

Schalke's outstanding European run - having topped their group and won every home game this season - has even taken some players by surprise, including 33-year-old Raul, who joined after 16 trophy-rich years at Real Madrid.

The three-time Champions League winner and the competition's record goal-scorer has not played in a quarter-final for years with Real exiting at the Round of 16 every time since the 2005/6 season.

"Raul told me after the game 'think about it, we had to change to Schalke to finally play another Champions League quarter-final'," said defender Christoph Metzelder, who had played at the Spanish club with Raul before they both joined Schalke last year.