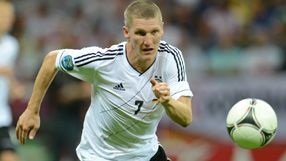 Schweinsteiger, criticised for playing in the European Championship despite nursing an injury picked up in Bayern Munich's Champions League final defeat by Chelsea, said Germany's overall record was very successful.

"[Semi-final finishes] should not be taken for granted," the holding midfielder told reporters on Tuesday. "We did not drop a point in the qualifiers, we beat top-10 teams in our group and then lost just one game.

"I think it is a pity, it is not always fair but that is the way it is. There are other teams who have targets and it is not easy to keep winning."

Germany completed their first-ever perfect Euro group stage with wins over Portugal, Netherlands and Denmark before beating Greece in the quarter-finals for their 14th successive victory in competitive games.

They had also won 10 out of 10 qualifiers for a new German record.

"I don't think everything is bad, not many teams can claim to have such a track record," Schweinsteiger said. "I think the respect is missing a bit. It is nowhere written down that we are going to win every game.

"I did everything to reach that Champions League final and [for the Euros] I had little time to recuperate," said the 28-year-old, who missed his team's first two 2014 World Cup qualifiers in September, but will be captain against the Republic of Ireland on Friday with Philipp Lahm suspended.

"Two or three weeks more maybe would have been even better for the injury to be cured but I think I gave everything I got at the Euros," the midfielder added. "Unfortunately in one game against a great team Italy we lost."

The national team have been criticised since that defeat for failing to clinch a major trophy in 16 years, while coach Joachim Low has been accused by Bayern Munich President Uli Hoeness of being too soft with his players.

"The team is working well and that means I can now focus more on my game," he said. "I feel fit and healthy."